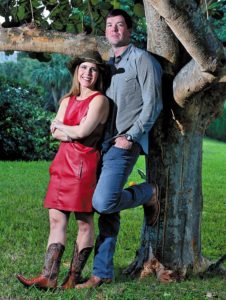 She brings a lot of Boca Raton.
He brings a lot of Texas.
Together they seem perfect to serve as honorary chairs of Boca’s 2020 Rhinestone Cowboy Ball, a Feb. 29 fundraiser for the George Snow Scholarship Fund.
Paige Kornblue Hunter, former WPTV NewsChannel 5 anchor and reporter, and her husband, Andrew Hunter, are the Boca Raton residents chairing the event, whose theme is Boots and Bling.
Paige will also be the emcee.
Andrew commutes to Dallas for a four-day stint each week at the oil and gas company Guidon Energy, where he is a drilling adviser and managing partner.
In addition to having a presence in different states, the two devote time to their family, many charities, their children’s school and their careers.
Ask them how they get it all done, and Andrew will answer. “We live life to the fullest.”
Paige adds, “We don’t sit much.”
A Boca Raton native, Paige, 39, went to St. Andrew’s School and received her bachelor’s degree from the University of Michigan. Her first job out of college was at a TV station in Lake Charles, Louisiana. After that, she returned to Palm Beach County to work at WPTV.
Andrew, 37, is from Baton Rouge, Louisiana, and received a degree in petroleum engineering from Louisiana State University.
The two got together seven or eight years after Paige had returned to Palm Beach County. She was invited back to Lake Charles by a friend who did the weather there. The weather friend was married to a good friend of Andrew’s. That couple set up a Mardi Gras ball blind date for Paige and Andrew, who at the time was working on an offshore oil rig. Andrew picked up Paige at the airport and they headed to the ball. Before long they were engaged.
Paige took a break from TV news at WPTV, and the couple settled in Dallas. They were married in 2011 at the Boca Raton Resort & Club, where Paige’s parents were married in 1975 — and where the Rhinestone Cowboy Ball is being held this year. They lived full-time in Dallas, fixed up a home and had three children there.
They moved back to Boca Raton in 2015. The catalyst for the move was that Paige’s mother, Andrea Berry Kornblue, was battling cancer. “We came back to help her in the fight,” Paige said. Mrs. Kornblue, who died in 2018, was a longtime member of the Junior League and volunteered with many organizations.
The Hunters stayed in Boca Raton, swayed by the lifestyle. “We love it,” said Andrew. “The lifestyle’s so good, especially with kids, that it’s worth it to commute. We have three days a week on the beach with the family.”
Paige is a member of the Junior League and volunteers for organizations such as Boca Raton Regional Hospital, Food for the Poor, American Heart Association and the American Cancer Society. She and Andrew got involved in 2008 with the George Snow Scholarship Fund, which since its inception in 1982 has awarded more than $12 million in educational grants.
Paige’s father, Dr. Edwin Kornblue, who was the first dentist in Boca Raton, knew George Snow, she said.
Andrew is president of the Dallas Fort Worth Chapter of the American Association of Drilling Engineers, an organization that has granted $560,000 in scholarships to engineering students across the country.
Meanwhile, Paige wants to put writing back in her life and by Feb. 1 will have launched her own website and blog. “I miss the writing, getting out there and telling some stories,” she said. Her website will be www.PaigeKornblue.com.
The Hunters have three children: Maya Blue, 7, and twins Clay and Cody, 5. They attend the A.D. Henderson University School at Florida Atlantic University, where Paige is a room mom for both classes and Andrew is on the school board.
Other family members are also nearby. Both Paige’s father and Andrew’s father, Chuck Hunter, are in Boca Raton.
Family and friends are the most important thing in their lives, Andrew said. “We have a very diverse and wonderful group of friends around us. We both like to socialize and surround ourselves with great people.”
Said Paige: “We both like to have fun and live for the day.”