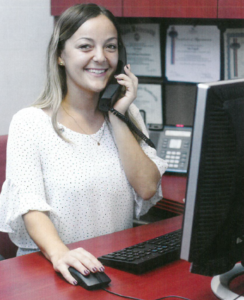 Immigration is a hot-button issue in today’s divisive political climate, but few could argue that war refugee Ana Gagula hasn’t been a positive force since alighting in Boca Raton from her native Bosnia.

Born in Sarajevo in 1991 to a Serbian mother and Bosnian father, Gagula survived the genocide that claimed more than 8,000 lives and tore apart her homeland.

“My mom and dad were a Romeo-and -Juliet kind of story, but the war broke out when was just four months old and our family was separated,” she says. “I didn’t meet my dad again until five years later in Germany.”

In 1998, the family received refugee status and immigrated to the United States. They were slated to settle up north but a childhood friend of her father ‘s offered to sponsor the family in warmer climes.

“He lived in Boca Raton, Florida, of all places,” she says. “Every time I go to the beach I think of how lucky I am to be here.”

No one in the family spoke English, so it was tough going for a while. But Gagula soon learned the language, worked hard in school and was awarded a George Snow Scholarship.

She used it to study accounting at Florida Atlantic University and got a job at a local accounting firm after graduating. But she lacked passion for the profession, so she went back to FAU to earn an MBA and never really left. The university hired her as Customer Operations and Outreach Programs Manager in the Office of Student Financial Aid.

“My duties are to make sure the students and parents who come in get all of their questions about the financial aid process answered,” she says. “Another really cool part of my job is outreach. I go to high schools to talk to students about financial aid.”

She also volunteers on the interview committee for the George Snow Scholarship Fund.

“I absolutely love my job,” proclaims the vivacious 27-year-old.

“It’s a full circle as I was once that student trying to figure out how I could best finance my studies to accomplish my goals. Now I help them do it. It may sound like a cliché but it’s one of those jobs where you go home at the end of the day and feel that you’ve really made a difference.”