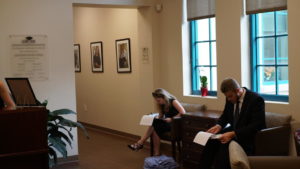 After two days and 140 interviews with top-performing high school seniors in Palm Beach and northern Broward counties, officials at the George Snow Scholarship Fund have embarked on a daunting task — figuring out which of the students will receive portions of over $1 million in scholarships.

The scholarship, which is available to high school seniors in Palm Beach County as well as Blanche Ely, Pompano Beach and Marjory Stoneman Douglas high schools in Broward County with a demonstrable financial need, can pay for students’ college tuition, either in its entirety or a portion of it. The scholarship is also available to a small number of graduate students.

The organization has been known to write emergency checks when unexpected costs like medical issues or supplies come up. But the sum of money awarded is only part of the story of the organization and the relationship its volunteers form with the students.

From catastrophe to compassion

The fund’s namesake derives from George Snow who moved to Boca Raton in 1958 to take a position as a high school math teacher at what is now Atlantic High School in Delray Beach. Snow died in a helicopter accident in 1980 and his family decided to start a scholarship fund in his memory.

Registration for the application opens in November. After the February deadline, about 70 volunteers look at the applications and the students’ grades, test scores and personal stories and narrow down the applicants to the most deserving.

According to the organization, it received just under 1,000 applications this year. Recipients are generally announced in May.

“One of the big things that we do is we literally go to every high school in Palm Beach County to talk to the kids about the opportunity they have and to answer any questions they have about the application,” Snow said. “Every application gets seen five times and then they score them in three different categories.”

Each volunteer assigns a score to each category of the student’s application, and then they are all totaled and averaged out. After the number of applicants is reduced, they schedule interviews with students over the course of two days in which they get to know the students better, find out their personal and professional goals and get insight regarding their personal histories and struggles.

Volunteers described the process as difficult — both logistically and emotionally — but rewarding at the same time.

Suzy Geller was a guidance counselor at Carver Middle School in Delray Beach before volunteering at organizations including Boca Helping Hands, Sandoway House and Family Promise, among others. She also volunteers as one of the interviewers who meet with applicants for the Snow scholarship each year.

“Every year, I leave with two feelings,” she said. “‘Oh my gosh, I have such hope for the future, because they are really, truly rock stars,’ and then I also get very sad because I think, ‘as a guidance counselor, the kids that have been bullied and have had nothing and have struggled in every way, shape and form, that they didn’t have more help in all these years.’”

Philip Studer is a commercial banker for SunTrust Bank and volunteers as an interviewer.

“I like doing this every year, even though it is grueling because each year it gives me this renewed sense of hope because unfortunately, we don’t always see kids like this getting put in the media or reported on and having their wonderful stories told, so once a year I come back here and I see those types of students and individuals and it just gives me a renewed sense of hope.”

The foundation has fundraising campaigns and events. Snow said the more money they raise, the more they can offer in scholarships.

“We raise funds in every way,” he said. “We have people that underwrite scholarships, we do the cowboy ball, ballroom battle, we have a golf tournament that we do, but most of what we’re doing here and giving away here is people giving money specifically to scholarships.”

Snow said that donors can create their own criteria for students such as career path, the school that they graduated from, or their heritage or faith.

The fund also assists students in finding internships relevant to their interests and strengths. Part of the money the organization raises is paid to students as compensation for internship work at $15 per hour that could otherwise be unpaid or minimum wage.

This year, it is partnering with American Caregiving Youth, Habitat for Humanity, Florence Fuller and Nat King Cole Generation Hope for internship placement.

After their interviews, a few students spoke about their experiences going through the application process, being interviewed and what they hope to do in college and after.

Mia Zarows, 18, of Delray Beach, will be attending the Savannah College of Art and Designwith the hopes of designing theme parks and other attractions.

“I was pleasantly surprised to see that they remembered, or reviewed prior to, a lot of the information I wrote in my essay or put on my application,” she said. “They referenced certain artwork that I won awards for and asked me about that and also referenced my hopeful career choice.”

Garrett Flitton, 17, of Jupiter, will be attending Florida Atlantic University to study engineering and wants to develop autonomous vessels for the Navy.

“Going back through the essays we had submitted and the material we had shown them of what we had created or been interested in and having them focus on that instead of it being just a standard five questions, what are your strengths, what are your weaknesses?-type interview, I felt appreciated as people are paying attention to what I want to do.”

Matthew Kenny studied media and communications at Florida State University where he received his bachelor’s degree. He has since been accepted to a graduate program to study psychology at Harvard University, which will be paid for in part by a scholarship he received through the Snow Fund. After earning his master’s degree, he said he hopes to pursue a Ph.D. and teach psychology in college.

Kenny, 25, wants to study and teach positive psychology, which deals with issues like overcoming trauma or depression or addiction. When he found out he received a scholarship, he said he was elated. It was a proud moment for his mother as well.

“I was over the moon excited,” he said. “They had a big banquet reception with all the scholarship recipients that I brought my mom to and it was just a really proud moment for both of us. It was a culmination of all my hard work that I’ve done.”

He recalled getting surprised during midterms of his first semester with a letter of encouragement and some treats.

“I remember getting a package delivered to my dorm and it was this metal tin with cookies and candy and popcorn and a letter that said: ‘here’s a goodie bag for you to help you with the stress, we know midterms are coming and this is a stressful time of year, so here’s something to let you know we’re thinking of you,’ and that was just so nice,” he said.

“I had won other scholarships but none of them ever reached out to me the way they did, and that continued every single semester. I always looked forward to getting the tin of cookies around midterm and final times.”

Silvana Bastante graduated from Florida Atlantic University after having received a scholarship from the Snow Fund. Now, she is working on getting her master’s degree in public administration from the University of Central Florida, with the hopes of working in community development.

She recalled not checking her email enough as a high school senior and having representatives from the organization call her school many times to have them inform her she had been awarded a scholarship.

“They were so adamant about getting me to follow through,” Bastante, 26, said. “Anyone else would have been like, ‘well, she’s not answering,’ so I think from that moment I thought, ‘wow, they genuinely want me to have this and want me to succeed.’”

The news came as a shock to Bastante who said she thought she would be unable to attend college because she could not afford it, but she ended up receiving $1,000 per semester. She has since landed a job as a result of networking through the foundation.

“They helped me a lot,” she said. “They were a very big sense of support.”