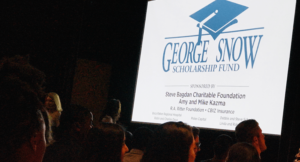 Did you have a class ranking in high school or ace the SATs? These Snow scholars did.

George Snow Scholarship Fund awarded over $1.4 million in scholarships Friday. But as always, the spotlight was on the accomplished kids.

Boca Raton High grad Kyle Felter’s going to Harvard.  “I’ve wanted to go there since I was 8,” the prospective history major and government minor said at the buffet dinner for families and Snow supporters before the ceremony.

Daniel Weppner takes care of his autistic brother. So the American Association of Caregiving Youth/Polen Capital Management gave him one of three, including Boca’s Central Rotary Club and Boca Raton Exchange Club Foundation. 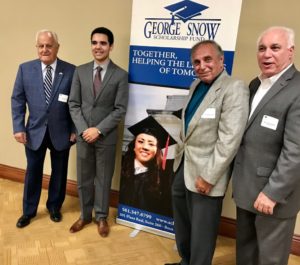 Snow administers its own scholarships, but most are by families, nonprofits and foundations who paid for them.

Many are memorials like the fund’s, when it started 37 years ago, said president Tim Snow, who emcees these proceedings.

That’s when his father, George Snow, went missing in a helicopter crash, he said.

Since then the fund has awarded more than $12 million in scholarships and helped 2,002 students receive a college education. It has grown so much, a Jumbotron listing names of supporters was not even legible.

“We’re blessed to be in a community that values education and steps up,” he said.

The gold sponsors were Steve Bagdan Charitable Foundation and Amy and Mike Kazma.

Next up is Snow’s major fundraiser, Boca’s Ballroom Battle Sept. 20 at the Boca Raton Resort & Club. Here’s the link for tickets or donation to any of eight community leaders dancing this year https://www.ballroombattle.com/